Red Bull’s Max Verstappen breezed to his maiden Monaco Grand Prix win over the Ferrari of Carlos Sainz and McLaren’s Lando Norris, with Ferrari polesitter and home hero Charles Leclerc failing to take the start after suffering a pre-race driveshaft issue – Verstappen also claiming the lead of the drivers’ championship for the first time in his career after Lewis Hamilton finished a disappointed P7.

With five players earning equal points on the day, only Ian made a move forward largely thanks to his sole choice of Carlos Sainz Jr. over Valtteri Bottas, the latter’s race ending thanks to a stubborn right front tire. Michael fell further back in the standings as he missed out on Lance Stroll’s excellent day. John Lo, Danielle and John Cavelti continue to lead the way after the fifth race on the calendar. 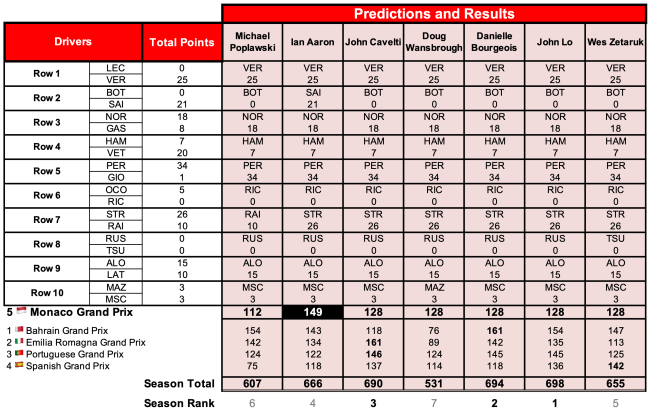 This entry was posted on Sunday, May 23rd, 2021 at 14:50 and is filed under Formula 1. You can follow any responses to this entry through the RSS 2.0 feed. Both comments and pings are currently closed.