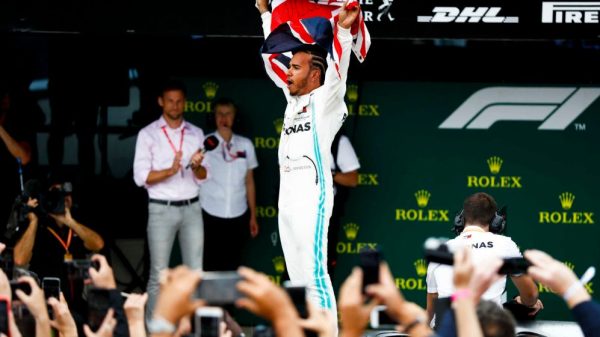 Once again a huge crowd turned out for the British Grand Prix at Silverstone – and once again they were treated to a thriller. Pole-sitter Valtteri Bottas looked to have done everything right as he led from the front and fought off team mate Lewis Hamilton, but a Safety Car intervention gifted his Mercedes team mate a free pit stop, allowing him to leapfrog the Finn and ultimately a record sixth home win. But the lead battle was just part of the story…

Top drives of the day: Lewis Hamilton (31) outmaneuvered his teammate to win from second on the grid; Daniil Kvyat (27) moved up from the 8th Row well into the points, and Carlos Sainz, Jr. (26) finished sixth.

Our close race has a new leader, with Evan assuming the lead from Ian, and Danielle holding on to third place. John Cavelti and Tim were the leaders on the day, leaving them in fifth and sixth place, respectively,

This entry was posted on Sunday, July 14th, 2019 at 21:53 and is filed under Formula 1. You can follow any responses to this entry through the RSS 2.0 feed. Both comments and pings are currently closed.