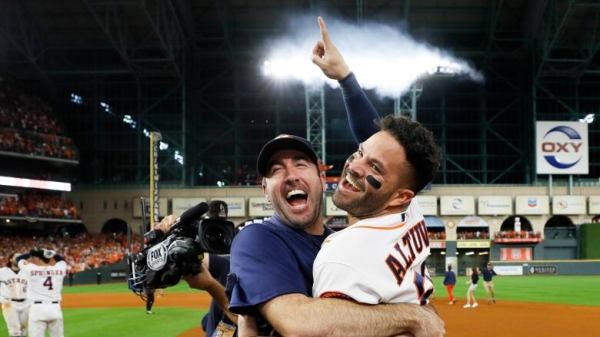 Jose Altuve, right, celebrates with teammate Justin Verlander after the Astros eliminated the New York Yankees 6-4 in Game 6 of the ALCS on Saturday. Altuve hit a game-winning two-run blast in the bottom of the ninth to send Houston into the World Series. (Matt Slocum/Associated Press)

Wes earned the top score for the round, moving him into a strong second place overall behind John Woycheshin, who also had both series winners correct.

This entry was posted on Sunday, October 20th, 2019 at 10:25 and is filed under MLB Postseason. You can follow any responses to this entry through the RSS 2.0 feed. Both comments and pings are currently closed.