Round of 16 Matches completed Tuesday:

Sweden has earned a spot in the quarter-finals after an Emil Forsberg (10) goal gave the team a 1-0 win over Switzerland at the World Cup on Tuesday. (Giuseppe Cacace/Getty Images)

Angie alone was perfect in predicting the eight teams to advance to the Quarter-finals that begin Friday, earning bonus points and the best score in this round. Joel, John Wocheshin and John Eastaugh each earned bonus points for having two match scores exactly correct.

John Woycheshin has built a small lead the top of our table, ahead of Wes and Joel, with Angie and Evan occupying the last of the five prize spots after this second round of five in our game. Hailley stands just outside of the prize money on a tiebreaker (ties in our game are broken by seeing who has the best score in the most recent round)

For download: FIFA World Cup Prediction Challenge! 2018 Round of 16.pdf 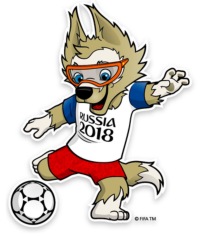 This entry was posted on Tuesday, July 3rd, 2018 at 18:00 and is filed under FIFA World Cup. You can follow any responses to this entry through the RSS 2.0 feed. Both comments and pings are currently closed.