Hurricanes Oust Defending Champs to Complete a Round of Upsets 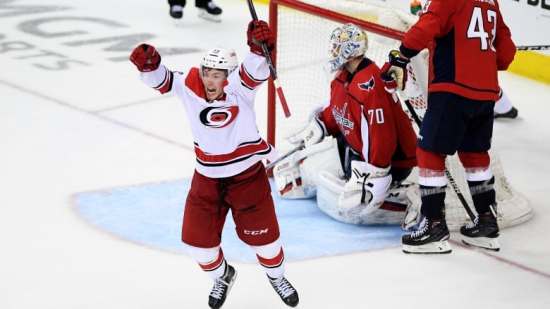 Carolina’s Brock McGinn celebrates after scoring the game-winning goal in double-overtime to give the Hurricanes a 4-3 win over the Washington Capitals in Game 7 on Wednesday. (NIck Wass/The Associated Press)

Logan was the one player to figure out this most unusual Stanley Cup Playoffs opening round, being the only player to have as many as half of the series winners correct. Logan was also one of only four players (Alexander, Kelly, Doug, Logan) to predict two series scores correctly.

This entry was posted on Wednesday, April 24th, 2019 at 21:44 and is filed under Stanley Cup Playoffs. You can follow any responses to this entry through the RSS 2.0 feed. Both comments and pings are currently closed.